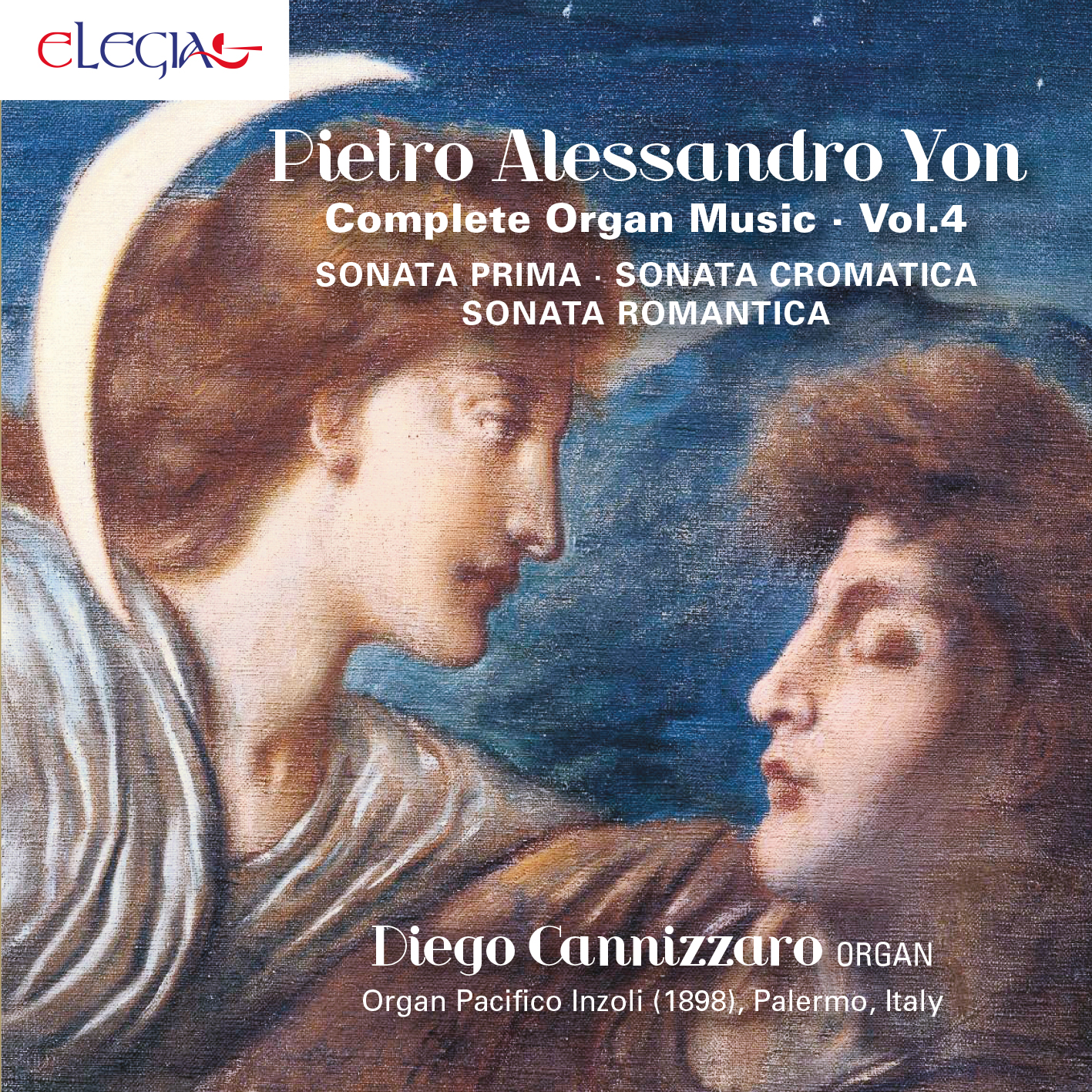 Organ Sonatas by Pietro Alessandro Yon (Settimo Vittone, 1866 – Huntington, 1943) are the most cultured compositions among his entire organ corpus.
The Sonata Prima, published in 1916 at G. Shirmers / New York, is dedicated to Al Reverendissimo ed Illustre Padre Angelo de Santi, S.J. Presidente dell’Associazione Italiana di S. Cecilia e Direttore della Scuola Superiore Pontificia di Musica Sacra in Roma. The Sonata is among the first compositions that Yon published: only the Toccata dedicated to Remigio Renzi, Natale in Sicilia and two Concert Study come before it. It is like an exercise of composition linked at the same time to a revisiting of musical forms: Yon played them during his studies in Rome. The entire Sonata is written in trio: the Allegro of the first movement recalls the sonatas in trio by J. S. Bach, although Yon creates the movement on two themes. In the first movement Yon uses sounds of medium intensity in order to exalt the cleanness and the strictness of the three voices. The second movement is a very intense Adagio, in three parts, based on the dialogue between the Oboe and the Viola in the external sections, while in the central one between the Flute and the Clarinet. Even in this movement Yon recalls Bach on the theme among the voices. The third movement is a minuet with ABA CA: Yon uses the sections alternation to give interesting and original timbre indications. The C section has the Musette label, in which, on a fixed note of the pedal keyboard, we have real sounding games. The fourth and last movement is a Theme and Variations in which Yon has technical and compositional virtuosity: the fourth variation is the only page of the Sonata in which the author leaves the three voices writing in order to shift to a virtuosic passage for pedal keyboard. The end of the movement and of the Sonata is granted by a masterly Fugue for three voices, which subject is the first theme of the first movement.
The Sonata Cromatica (seconda) was published by Yon in 1917 at J. Fischer & Bro. – New York and has an important dedication: A Joseph Bonnet, Organiste de la Societé des 1919 Joseph Bonnet performed more than 100 concerts in USA and in 1921 he founded the Eastman School of Music in Rochester (New York – USA). There were years in which USA tries to absorb the European organ tradition: for this reason the contacts among the organ players multiply and Yon was ready to weave profitable relationships in professional level. The first movement of the second Sonata has an incipit with strong tunes that show to the listener a very whirlwind atmosphere. The first theme is deeply rhythmic, whereas the second is quieter and dreaming, with smooth sounds, which contrast exalts at most the expressive possibilities of both themes. The chromatic characterization is particularly present in the first theme, where the virtuosity contributes to emphasize the tension pervading all the first movement. In the second instead the chromatic theme deeply contributes to give a sad character and the choice to commit the first theme to the Oboe is very functional. The second movement continues with both moments of melancholy and dream, steadily supported by the consistent chromatic gait. In the end the third movement is divided in a Fantasia of rare harmonic intensity and a Fugue that leads the listener to the final sounding explosion: it resumes all the chromatic tension gathered during the entire sonata in the seven descending notes for chromatic semitones to the pedal keyboard on a powerful tune played at the maximum sonority.
The Sonata Romantica (terza) was published in 1922 also at J. Fischer & Bro. – New York five years later the publishing of Sonata Cromatica. In the meantime Yon published many important works, first among all Concerto Gregoriano. The language of Sonata Romantica is different from the others: Yon has fully developed his characteristic style, based on endearing themes, supported by a spectacular virtuosity. Sonata Romantica adopts the cyclical form and the recurring theme is immediately presented as the first theme on very strong sounds. The first movement is thought out by Yon in a very elegant way, with different combinations of sounds that sometimes they crossed themselves, sometimes lead to an Allegro or a pastoral Allegretto. The second movement, the Adagio, is a moment of ecstatic suspension on the soundings of Voce Celeste and of the Clarinet with a wise use of harmonic tensions. At the end of the movement the Clarinet prepares the entrance of the leading theme, committing it to the Voce Celeste. A real coup de theatre considering that, during all the second movement there was not, while, during the first, the theme was always presented with strong soundings. Immediately afterwards, at the beginning of the third and last movement, the theme itself will be exactly repeated as at the beginning of the first. The third movement is a great symphonic piece, a brilliant Allegro, that progressively pours all the tension in a great finale. (Diego Cannizzaro)