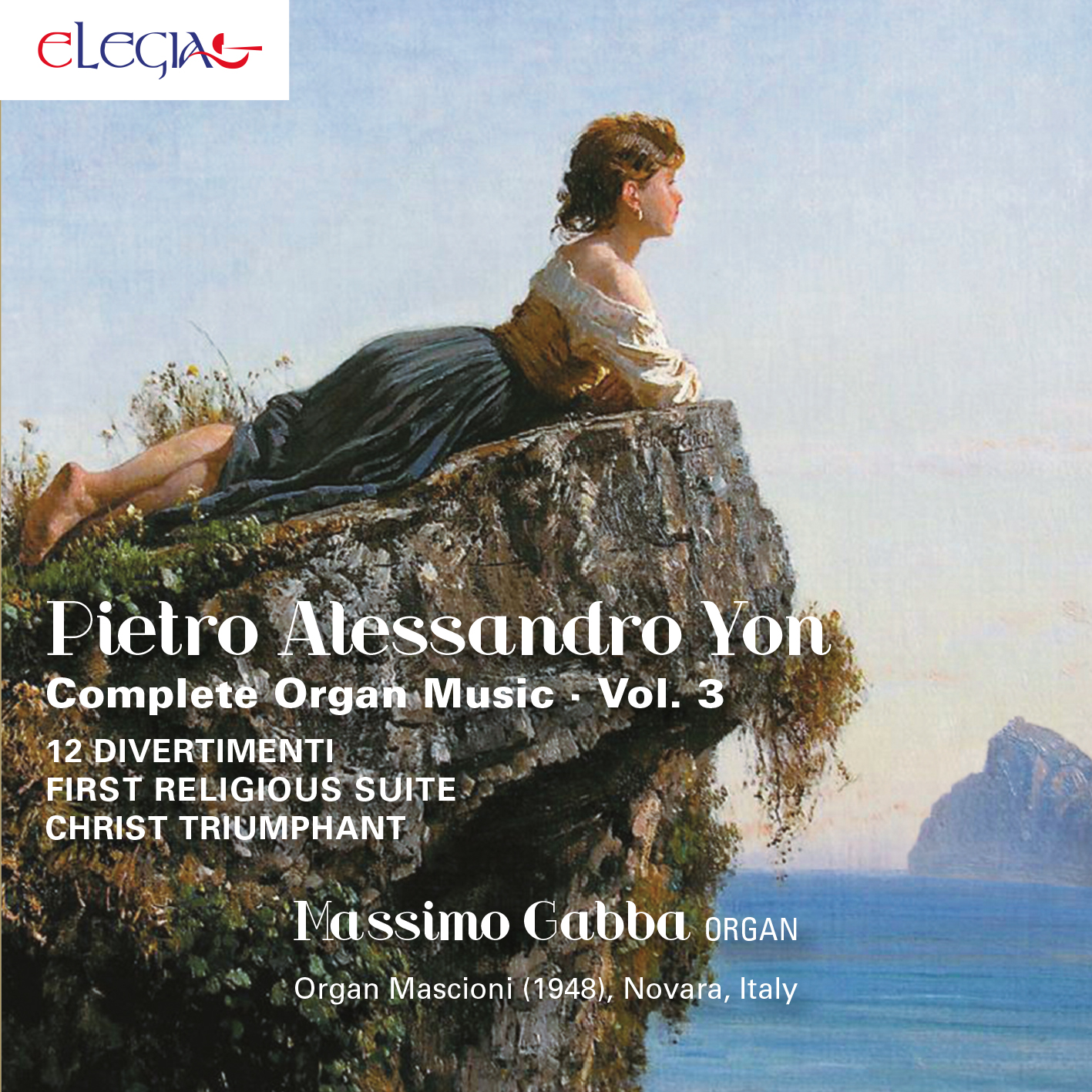 In the previous volume of this complete collection of Pietro Alessandro Yon’s organ music (Settimo Vittone, 1886 – Huntington, 1943) we have proposed a musical production purely dedicated to concert performances, made of virtuosic compositions rich in spectacular sound and technical effects. If the organ used in the other recording retraces the American organ aesthetic, the chosen instrument for this third volume is the historic Mascioni of 1948, placed in the Basilica of San Gaudenzio in Novara, with the typical Italian sounds. This is due to the characteristics of the repertoire here proposed, no longer strictly virtuosic, but with a major attention to the typical colors and sounds of the Italian instruments, built in the first half of the XX century. Here is therefore a medley of heterogeneous works that practically concern all the styles: Toccata, Suite, Divertimento, Nocturne, March, Pastorale, all written in Yon’s American period and published between 1912 and 1943. Toccata in Re maggiore is dedicated to Remigio Renzi, Yon’s teacher and professor at Accademia di Santa Cecilia in Rome, from whose Toccata in Mi maggiore he gets his own inspiration, retracing broadly the structure. A collection of descriptive pieces is 12 Divertimenti, almost a sort of symphonic poem in miniature, each of them with their own characteristics and so executable even separately. Toccatina and Rapsodia italiana are nowadays present in the concert programs, while the other pieces are, unfortunately, forgotten. Published in 1943 Advent, First Religious Suite for Organ is about Gregorian and Christmas themes. Already in France, between XIX and XX century, composers as Ch. M. Widor, Paul de Malingreau, Léonce de Saint-Martin have written religious symphonies for organ, based on specific ecclesiastical melodies. Yon uses the musical material in a very personal way, far from the French style very popular at the time. Canto Elegiaco and Sheperd’s March are two pieces published in 1937 and 1942. The first is a dramatic and introspective nocturne for organ, while the second is a joyful pastoral march on free themes. Dedicated to the beloved Mario and published in 1921, La Concertina is a very brief suite in three movements, in which the traditional organ pipe plays as a Wurlitzer, a kind of theatre and cinema organ, used in the days of silent cinema to reproduce the most varied sounds (train, wind, rainstorm) with the typical thrilled and shrilled sound. Christ Triumphant is at first a composition for Soli Coro ed Organo, here proposed in the organ transcription of the same Yon. Based on the Easter hymn Aurora Coelum Purpurat, it is a magnificent and solemn piece, in which the register Campane is used for the first time in this CD.